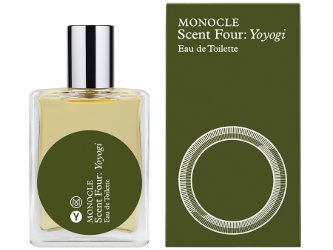 Comme des Garçons will launch their fourth fragrance in collaboration with Monocle magazine, Scent Four: Yoyogi. Scent One: Hinoki launched in 2008, followed by Scent Two: Laurel in 2009 and Scent Three: Sugi in 2013.

We've partnered up with Comme des Garçons once more to develop our fourth scent: Yoyogi. Created in Paris by perfumer Nathalie Cetto, the fragrance was conceived by Monocle’s Tyler Brûlé and French fashion label’s Adrian Joffe – before being perfected in the laboratory of Switzerland-based Givaudan. The appealing unisex scent takes its woody lead from cypress, freshly mown grass and wormwood, and was designed to evoke the sensation of an early-morning run around its namesake: Yoyogi Park in Tokyo.