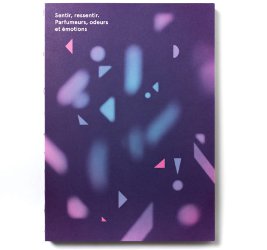 English speakers, don’t click away! Although this book’s full title is Sentir, ressentir. Parfumeurs, odeurs et émotions, every article is in both French and English. If fragrance interests you — if you want to know more about how perfumers work, what inspires them, how fragrance intersects with emotion, and a lot more — you’ll want to read this book.

The book is a 224-page compilation of interviews and essays exploring scent. The book breaks into four sections1: an overview of the perfumer’s craft and thoughts on how to exhibit fragrance; interviews with thirteen big-name perfumers; a section on the science of scent and emotion; and mini-essays on a variety of scent-related subjects loosely described as “scent and feeling.”

I read a good chunk of Sentir, Ressentir while I was in line at the DMV to renew my driver’s license. The book was absorbing enough to make me forget I was number 120 when the guy on the intercom was calling number 15. While the woman in line ahead of me complained about her knees and the family behind me chattered in Hmong, I was nodding along with Dominique Ropion’s comment that, unlike other senses, smell can’t be re-experienced without its source. (Think of a rose: You can remember exactly what a rose looks like and how its petals feel, but you can’t smell it from memory.) I admired Patricia de Nicolaï’s desire to make perfume that people feel comfortable wearing. I longed to get home to my bottle of Le Galion L’Ame Perdue after reading Rodrigo Flores-Roux’s description of its development. I felt sad, yet gratified, learning that Vero Kern (to whom the book is dedicated) had all along intended Vero Profumo Naja to be her final perfume.

That’s just a taste of what Sentir, Ressentir has to offer. So much of the rest of the book stayed in my mind, too, or caused me to think, “Aha!,” such as when I read scientist Sylvain Delplanque’s explanation of why we have such a tough time naming odors, even if we recognize them. I also relived Maurice Roucel’s first day at Chanel, welcomed by Henri Robert, and I understood Isabelle Doyen’s vision, when creating Annick Goutal Un Matin d'Orage, of a gardenia bush "with deep green leaves, glistening , water droplets on the petals of the shell-like flower, and also a warm atmosphere, mist rising from the soil and light filtering through it...and, who knows why, floating over this whole scene, the white spaceship from 2001: A Space Odyssey." 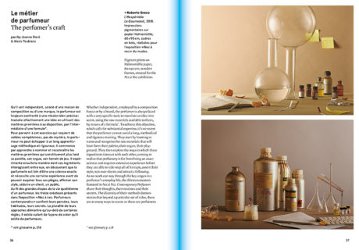 So far, I've talked about Sentir, Ressentir’s content, but the book fascinates as an object, too. It’s a paperback with an open spine showing the pink thread binding its pages and allowing the book to be laid open flat. Every page has some color — the pages shade to blue toward the spine — and many pages feature color photographs and illustrations, including arty portraits of perfumers laid out like a photographer’s contact page.

I love a perfume book that tells stories about special fragrances and shows photos of fancy bottles. Who wouldn’t? Sentir, Ressentir is something different. Instead of focusing on the art itself, the reader steps into the artist’s studio and examine how the art transforms the person who experiences it. For me, Sentir Ressentir is a must-read for anyone serious about fragrance.

Sentir, Ressentir is €28. It was released March 7 and isn’t yet available in the United States, but Fumerie has expressed interest in carrying it, and Nez’s marketing manager said it will likely be available at Luckyscent.

1. Sentir, Ressentir’s table of contents divides the books into three sections (contemporary perfumers; perfume and emotions: from the researcher to the perfumer; and scents and feelings), but to me the first section neatly subdivides into two categories: general essays and perfumer interviews.