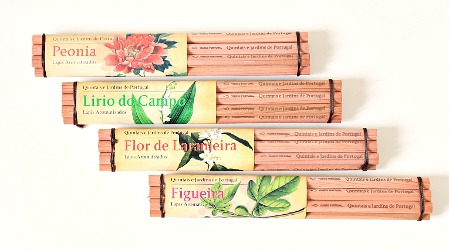 The cedar barrels of these HB pencils are perfumed with nostalgic scents of the Portuguese landscape, and convincingly so. The come in five different scents: Figueira - Fig, Jasmin - Jasmin, Lirio de Campo - Lily of the Valley, Peonia - Peony, Flor de Laranjeira - Orange Blossom. Viarco is Portugal's one and only pencil factory. Founded in 1907, Viarco has done a beautiful job of preserving and sharing their Portuguese while also constantly innovating unique new things. They are very much a 21st century pencil company.

Each pack of six #2 pencils is $10 at CW Pencils. (found via @glasspetalsmoke at Twitter)