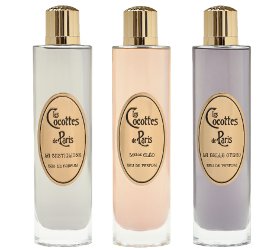 Anaïs Beguine has begun a new chapter, focusing on the nineteenth-century French courtesans known as the Queens of Paris, The Cocottes. They entertained, seduced and made headlines to the point where they imposed their style and taste on Europe and the Americas. Les Cocottes de Paris brings you new perfumes that tell a story centered on three scandalous icons.

La Castiglione ~ "This nocturnal, vampire-like creature has burst upon the social scene, where she brings a fragrance of newness. She is perfectly beautiful with a boldness that makes her fashionable." Notes for the oriental fragrance include  citron, mugwort, copaïba, licorice, patchouli, cedar, ambergris, myrrh and styrax.

Melle Cléo ~ "Harmony, precision, classicism, style and restraint are the values Cléo de Merode acquired at the Paris Opera. But her controlled appearance concealed a more ambiguous nature. Like a fierce hetaira, she stood out in a sort of brothel that was to become the foyer of the ballet school. In 1896, she was considered the world's most beautiful woman. An absolute star, she captured her contemporaries' imaginations." Notes for the floral fragrance include rosewood, bergamot, litchee, night blooming cereus, ylang ylang, rose, cotton flower and lichen.

La Belle Otero ~ "The beautiful gypsy, La Belle Otero, has an insatiable nature. The Queen of Elegance frequented kings and rich bankers from Paris to New York, St. Petersburg and Monte Carlo. She was the most spellbinding and the most ruthless courtesan of the Belle Époque. She devoted her life to dancing, men, precious stones, gambling parties and, above all, freedom." Notes for the woody floral include neroli, pepper, absinthe, fig, ginger, violet, musk, buchu, lavender, narcissus, frankincense, sandalwood and iris.