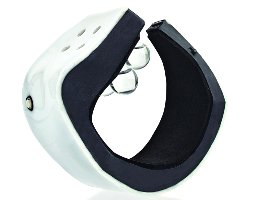 The Scent Rhythm watch was developed by Aisen Caro Chacin of the Parsons New School for Design. The prototype (it does not appear to be for sale) releases appropriate fragrances (from Demeter!) at intervals based on the body's circadian cycle:

Scent Rhythm is timekeeping device that maps relational olfactory sequences to the body's circadian cycle. The sense of smell is a chemoreceptor, which means that these sensors can detect chemicals. The sense of time, chronoception, is not based on the function of a specific organ, but rather the result of the interaction of the cerebral cortex, cerebellum and basal ganglia. This device attempts to keep a chemical watch on the circadian rhythm, by administering fragrance+supplement concoctions associated with the daily activity of the moment to promote the production of certain neurotransmitters, such as chamomile+melatonin during sleep, espresso+caffeine during the awaken state.

You can read more about the watch (and see pictures of the Demeter fragrances she is using) at Aisen Caro Chacin's website.