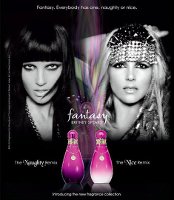 Fantasy The Nice Remix ~ "Dreamy and uplifting, this sparkling, fruity scent highlights the flirty kiwi from Britney’s original fantasy fragrance, while keying into the uplifting, core notes of yummy cupcake and jasmine petals. The Nice Remix finishes with a serene creamy musk, creating a romantic soft blend that leaves behind a whimsical trail."

Britney Spears Fantasy The Naughty Remix and Fantasy The Nice Remix will be available in 30, 50 and 100 ml Eau de Parfum.