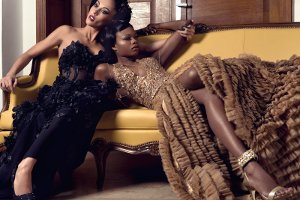 Perusing photos of Denis Durand’s Cher-worthy gowns didn’t give me much confidence I’d like Parfums M Micallef's Le Parfum Denis Durand Couture. One gown in particular — a sort of cross between a black lace negligee and something that might have been on stage at the Moulin Rouge in the 1890s — really scared me. If I want bombastic, I already have a few divas in my perfume cabinet ready for action.

Well, shame on me for making assumptions. While Parfum Couture could never be called shy, neither is it the crass, room-hogging perfume I feared. Instead, it’s a warm, easy-to-wear oriental balancing tangerine, honey, and amber with a streak of metallic tang. I bet it will find a lot of fans. I’m one.

Parfum Couture’s tangerine and honey leap right out of the fragrance at first, reminding me of Byblos by Byblos (remember that one?) layered over the new Schiaparelli Shocking. I like the combination of sweet and animal that honey gives a fragrance — something about it reminds me of drinking sweetened ice tea. As for the citrus, in the mid-1990s I was obsessed with tangerine-laden fragrances, and I even wore Guépard for a while, despite the cheesy gold and green plastic cage over its bottle. (Sorry, all you old office mates.) Parfum Couture reminds me of those fragrances, but softer and more elegantly blended.

Oud isn’t listed in Parfum Couture’s notes, but I swear I detect it cutting the mouthwatering heft of the tangerine and honey. Or is it the "animalis" listed in the perfume's notes?1 Orange blossom adds buzz, and Parfum Couture’s amber is the shimmery rather than cloying sort. I mostly smell the perfume’s patchouli after I’ve worn it several hours and on my clothing the next day, where it clings in a quiet, sexy way.

I wore Parfum Couture last night to an event where it had to compete with drag queens, Taylor Dayne, and a pork chop entree. I wanted to have some presence but not be overbearing, and Parfum Couture did the job well. At dinner I sat next to a woman in Guerlain Samsara, and my Parfum Couture was much quieter, but it held its own, personality-wise.

My only fear with Parfum Couture is that it’s so distinct yet so easy to wear that I might get bored with it. There’s only one way to find out, isn’t there? I guess I’ll need to invest in a decant before fall. 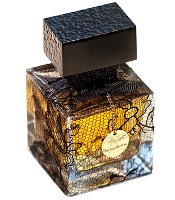 Parfums M Micallef + Denis Duran Le Parfum Denis Durand Couture is $190 for 50 ml and comes in a bottle covered in black lace and adorned with a satin bow. (I can’t tell from the photo if the bottle is lovely or goofy. If you’ve seen it firsthand, please comment.) For information on where to buy Parfum Couture, see Parfums M Micallef under Perfume Houses.

1. The perfume blog Cafleurbon did further investigating in this post and defines animalis as a blend of castoreum and labdanum. Later: see also Joe's comment below!