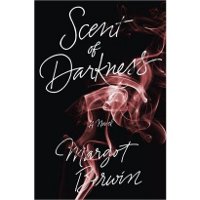 Think of a perfume that has a way of wearing you, instead of the other way around. Now imagine if one day that scent began to emanate from your pores, and had the power to seduce everyone around you. That’s what befalls the heroine of Margot Berwin’s Scent of Darkness, a contemporary fairytale that takes fragrance out of the lab and into the realm of Louisiana folk magic.

Evangeline is the granddaughter of a gifted “aromata,” a perfumer who is a wise woman and folk magician more than a cosmetic chemist. When Evangeline is 18, her grandmother dies, leaving Evangeline her house — and a vial of perfume: “Do not remove the stopper, Evangeline, unless you want everything in your life to change.” And change her life it does, as the perfume becomes a permanent part of her and its scent fills anyone who smells her with desire. Though the perfume snares the man she longed to be with, its unfading presence continues to draw dangerous attention. Evangeline follows her love to New Orleans where she hopes the city’s own sultry mugginess will dampen her scent.1 But instead of safety she finds a painter with his own dark power of attraction who offers the key to understanding her grandmother’s gift — if she’s willing to pay with heartbreak.

Scent of Darkness was, at first, bewitching. It’s not a literary masterpiece of magical realism, but Berwin’s dreamy prose is a refreshing break from the typical popular fiction accounts of perfumers piecing together aromachemicals: “Jasmine smells like human flesh. Mix it with cumin, which smells like sweat, and you have the scent of sex. If you spread it on your body, watch out, you’ll have sycophants all over the place, people crawling out of the woodwork to be close to you.”

But the novel’s glaring flaw is that Evangeline’s perfume wears her instead of the other way around, and she isn’t much of a heroine because of it — like a Sleeping Beauty who is zonked out for the whole thing. She acknowledges her mediocrity before her transformation, yet afterward she is content to be led along through life by the men she has infatuated, content to be special by virtue of her scent alone. She has no personal preferences, no identity beyond her two love interests: she goes where they ask her to, sits around waiting for them, even drinks what they drink — couldn’t she have gotten a hobby, and asked for red wine instead of bourbon?

Similar criticisms have been made of Twilight’s Bella, and given the popularity of that franchise I’m sure there are plenty of readers who won’t be distracted by Evangeline’s lack of depth and development. But if you are infuriated by people whose lives revolve around getting and having a significant other, you should probably pass this one by. I definitely fall into that category, and will gladly send this along to friends who might like it more than I did. If it finds its own way back to my book shelf some day I’ll likely keep it, I really did enjoy some of the passages. But in the meantime, I’m hoping publishers find the moxie to publish stories where perfume allows the characters to come into their own.2 Personally I would find that to be a lot more relatable, and a lot more enjoyable to read about.

1. I don't know New Orleans so I can't comment on the book's portrayal, but if you do and you've read it, please share!

2. One that does, albeit not through perfume, is The Life of Objects by Susanna Moore.