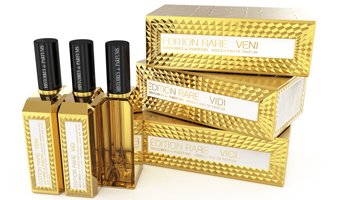 After having been crowned for a triumphant military conquest, Julius Caesar stood before the Roman senate and declared his victorious phrase “Veni, Vidi, Vici.” The echoes of those ancient battlefields have long since been silenced, but the expression continues to resonate. «Veni, Vidi, Vici» epitomizes the excellence of success, a merited victory with an inherent sense of boldness, knowledge and achievement...

Veni ~ "Like the early explorers who ventured beyond the borders of the known world, VENI offers an olfactory adventure worthy of the Odyssey. Journeying from a familiar bow of Lavender, the Cardamom must contend with a groundswell of Ambergris and strong gusts of Galbanum before landing on a pristine beach of Cinnamon. It then enters a dense forest of Guaiacwood, only to discover a bed of Carnations that hold subtle scents of Saffron, Vanilla and Patchouli. A journey worthy of the ancient epic heroes..." Additional notes include toffee, musk and oakmoss.

Vidi ~ "In an effort to understand the rules governing nature, VIDI blends a subtle mix of Cardamom with hints of Ozonic scents. Then Saffron and Rose, driven by forces of love and hate, come together in powerful marriage that intoxicates the spirit and forces it to rest on an altar where sweet Ambergris scents are serenaded by the sensual fragrance of a pure immortal stream. This perfume resonates somewhere between reason and passion with the intensity of Cardamom embracing and enchanting the spirit." Additional notes include plastic rose, cyclamen, water effects, saffron, immortal, musk, vanilla and white wood.

Vici ~ "VICI plunges into the heart of a real battle of the senses. After a first attack where powerful essences of Cardamom, Angelic root and Galbanum alternately prove themselves, a truce of Incense liberates Iris’ wonderful glow. Then the complexity of pure Osmathus interrupts this truce, and a second assault led by the fortified aromas of Musk and Patchouli leave us defenseless. Fortunately, however, the delicate scents of Vanilla and Raspberry come together on a soft bed of Cedar for a welcome pause. Exuding courage and bravery, this perfume is fitting for the most experienced warriors." Additional notes include pink peppercorns, basil, aldehyde, lavender and celery seed.