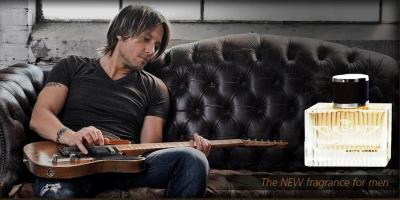 Keith Urban, judging from photos anyway, seems an unpretentious, casual-comfortable type of person. I don’t know much about contemporary country music or Urban but after smelling Phoenix I feel we have at least one thing in common — a love of desserts. If Urban had input in Phoenix’s development, and didn’t just slap his name onto a “made-by-committee” fragrance, the man has a major sweet tooth.

Phoenix starts with boozy aldehydes, leather and cocoa (smelling quite a bit like the Thierry Mugler A*Men “Pure” fragrances), and segues into a sheer suede-plus- “blackberries macerating in sugar” note. The berry note is fresh and “realistic” and is quickly joined by ‘vanilla ice cream’ (this initial vanilla note is sweet, but “cool.”) Then Phoenix goes to the stove to make vanilla custard (warm, creamy and dense). Leather is discernible but stays in the background after the opening notes, and as the sweets are “consumed” a slightly powdery tonka bean-patchouli-musk accord (a tad ‘nutty’) appears.

Phoenix is better formulated (and smells like its ingredients are of higher quality) than many of the designer-department store scents I’ve sampled recently (I'm looking at YOU, Yves Saint Laurent and Jean-Paul Gaultier). I was not expecting such an “edible” perfume under the Keith Urban brand, so Phoenix is an unexpected (and pleasant) surprise. Phoenix can certainly be 'served' to men and women alike…as long as they enjoy their leather fragrances infused with some sucrose.