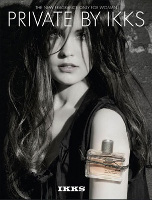 The notes for the floral fragrance include mandarin, blackcurrant, white flowers, amber, praline and vanilla.

IKKS Private will be available in 50 and 100 ml Eau de Parfum; it will not launch in the US until next year. (via us.fashionmag, cosmeticnews, parfumsberdoues)

Mally by Mally Beauty is available in 50 ml, concentration unknown, for $65, and can be found now at Henri Bendel in New York. It will debut on QVC later this month. (via cosmeticworld, wwd)