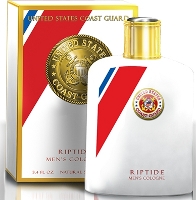 The American Line is a new series of officially licensed fragrances for men in the US Military (fragrances for women are reportedly in the works). A portion of the proceeds will be donated to military-related non-profit organizations.

Liberty (Navy) ~ "Understated and sophisticated, this blend starts with a platform of aquatic notes and features supporting notes of cucumber, aloe, melon, moss and musks to add character."

Patton (Army) ~ "Soft and nutty coconut peeks out from behind a citrus opening of bergamot and lime and evolves into a sweetly woody finish with cedar, sage and hints of tonka bean." Additional notes include lavender.

Devil Dog (Marines) ~ "A fresh and invigorating fragrance that marries the rich, earthiness of agarwood, sandalwood and cedar with the juicy coolness of citrus and chilly mint accords." Additional notes include lime, orange, sugar, ozonic accord and vanilla.