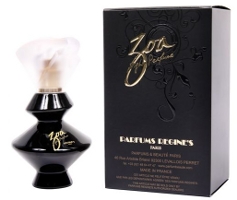 Zoa Night Perfume is an ambery-powdery floriental developed by perfumer Emilie Coppermann. I will update with notes later if I can find them.

Parfums Regine's Zoa Night is available now at Colette in Paris in 30, 50 and 100 ml, concentration unknown. Regine of Parfums Regine's will be at Colette on Saturday, June 13 from 4 to 6 pm to greet customers and sign bottles. (via colette, additional information via fr.fashionmag)