Ralph Lauren has announced that Argentine polo player Nacho Figueras, already the face of Polo Black, will also front Polo Blue and Polo Modern Reserve. See one of the new print ads below the jump, but first, here is his work for Polo Black:

The song is Anyone Who Had A Heart, reportedly sung by Sandra Booker. 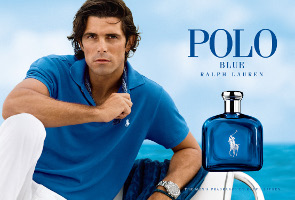 From the press release:

Ignacio “Nacho” Figueras, world class professional polo champion, is the face of The World of Polo’s print campaign that was shot by renowned photographer Bruce Weber. Appearing in the advertising for Polo Black since 2005, Nacho will now be the official spokesmodel of Polo Blue and the latest men’s fragrance introduction, Polo Modern Reserve. Nacho will also star in a television commercial that depicts the three fragrances directed by Weber.

Look for the new advertising to debut in June.