Last February when I reviewed Annick Goutal's Vanille Exquise, I noted that "I am not a huge vanilla fan in general, but there are cold, grey days when a bit of vanilla is just what you need". Those days are upon us once more, so this morning I'm road testing three vanilla fragrances: Guerlain's Spiritueuse Double Vanille, Le Labo's Vanille 44 and Indult's Tihota.

Guerlain Spiritueuse Double Vanille has been all the rage on the boards and blogs, and it is easy enough to see why. This stuff is simply delicious. It starts out thick and rich, with boozy undertones and a swirl of something smoky that reminds me of vanilla-scented pipe tobacco (the notes: vanilla, spices, benzoin, frankincense, cedar, pink pepper, bergamot, Bulgarian rose and ylang ylang). Like the recent Thierry Mugler Angel La Part des Anges, I want to drink it as much as wear it, at least in the opening stages.

The dry down maintains the character of the opening (this is not an "all about vanilla" fragrance) but gets softer, not quite so rich, certainly not so boozy. It is middling dark, but not at all heavy, and not really foody once it calms. Guerlain calls it "a carnal and aphrodisiac scent", but to my nose, it is more about comfort than sex; the mildly-spiced vanilla, woods and incense make it the perfect antidote to the gloom of winter. I found the lasting power to be excellent.

Guerlain Spiritueuse Double Vanille is a limited edition, and is sold in 75 ml Eau de Parfum. I know they had it at Bergdorf Goodman in New York and at the Neiman Marcus in San Francisco, but I don't know if either store still has it in stock and I can't risk calling them to find out — I'm not sure I can call a Guerlain counter without buying something or another. If you know exactly how much it costs (I think it was around $200?) and whether there is any left to be had, please comment.

It is a sign of the eternally weak dollar and the ever-onward-and-upward cost of perfume that the price of the Spiritueuse Double Vanille hardly made me blink (although mind you, I didn't buy it either). Le Labo's Vanille 44 ups the ante; Le Labo says it is $250 for 50 ml, $380 for 100 ml, but Perfume Posse reports $500 for 100 ml. This is Le Labo's "city-exclusive" scent for their counter at Colette in Paris, and I'm even less eager to call Colette in Paris than I am to call Guerlain in New York, so we'll have to just call it expensive and leave it at that.

In keeping with Le Labo naming conventions, Vanille 44 is so named because it has 44 notes, and the note in greatest concentration is vanilla. That doesn't mean, of course, that it will smell mainly of vanilla, and in the event, it doesn't; this is maybe even less focused on vanilla than the Guerlain. Worn next to Spiritueuse Double Vanille, Vanille 44 feels streamlined, almost minimalist. The top notes have a nice diffusive fizz, reminiscent of a woody vanilla soda with a twist of citrus peel, if such a thing existed (the notes: bergamot, incense, gaiac wood, mandarin, vanilla, muscenone, pipol and hedione). It dries down to a transparent musky skin scent with touches of dry vanilla and pale streaks of smoke.

Vanilla freaks needn't get worked up over Vanille 44, I shouldn't think — it just isn't vanillic enough to satisfy that particular craving. The first time I tried it, I didn't get worked up over it either, but after wearing it for a few weeks, I'm completely hooked. Vanille 44 is by perfumer Alberto Morillas, and about the fifth time I wore it, his Cologne for Thierry Mugler suddenly popped into my mind. They don't smell anything alike at all, but they have that same deceptive "little bit of nothing" character; you hardly notice you're wearing fragrance, but something smells very sexy indeed. I'd love to have a bottle of this. 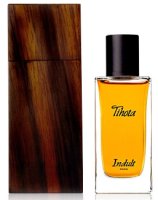 Indult's Tihota might be the only one of the three fragrances here that truly qualifies as a vanilla scent. It was developed by perfumer Francis Kurkdjian, and it smells like vanilla cake. A really, really nice vanilla cake, mind you, one with some sophistication — this isn't the sugar-laden cupcake from Britney Spears Fantasy — but still, what I think of when I smell it is: vanilla cake.

Tihota is full-bodied and rich, and the lasting power is good. I'm guessing that a true vanilla freak might like this one better than the Guerlain or the Le Labo (I know it has lots of fans at MakeupAlley), but I'm not a true vanilla freak. I thought it was really nicely done, but not interesting enough. Just as well; it's as spendy as the others ($250 for 50 ml Eau de Parfum), and like the Guerlain, it's limited edition, although in this case if you buy it before it runs out you join the "Indult Club" and thereby earn the right to purchase refills for as long as Indult stays in business. For buying information, see the listing for Indult under Perfume Houses.

I did not set out to review three expensive and hard to find vanillas, but that is how it worked out this time. If anyone has a great recommendation for an absolutely wonderful vanilla perfume under $50, one you can buy anywhere, please comment!