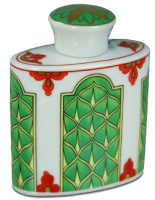 Catherine Fructus started Auguste in 1994 to bring back some of the old beverages, medical remedies, and beauty concoctions of her native Provence. Her website calls Auguste a "bienêtrerie", or, as my lame French would translate it, a made-up word for a "place you go for things relating to well being". At Auguste, well being includes private label pastis, soap, folk aphrodisiacs, manicure kits, and cherries in eau de vie. It also includes three parfums: Esprit de Chine, Esprit de Cuir, and Esprit de Chypre.

According to Luckyscent, the perfumes were copied from formulae found in handwritten perfume recipe books that Grasse's perfumers wrote between 1905 and 1920. Auguste used old methods to make the perfumes, too, so that they would be more faithful to the original scents. Although each scent is distinct — a floral oriental, a leather, and a floral chypre — they share a feeling of music played on old instruments and heard at the end of a hall. The problem is that I want to stand in the middle of the orchestra.

Luckyscent lists Esprit de Chine's (shown) notes as ambrette, orange blossom, lilac, carnation, muguet, white musk, tree moss absolute, and sandalwood, and it describes Esprit de Chine as Auguste's take on the "olfactory fabric" of the long-discontinued Millot Crêpe de Chine. I adore Crêpe de Chine, from its salty-woody top through its spicy, floral heart, down to its warm, wood drydown, and I was really excited to try Esprit de Chine. To me, these perfumes are worlds apart. Esprit de Chine is closer in character to Caron Narcisse Noir parfum, but without its vibrance and funky, medicated smell. On my skin, Esprit de Chine smells of indolic orange flower, almost like wet, rotting cardboard, and never really develops further.

Next up, Esprit de Cuir. Luckyscent lists Esprit de Cuir's notes as citron, geranium, galbanum, jasmine, clove, birch, oppoponax, tonka bean absolute, and oak moss absolute. Esprit de Cuir smells like it looks in its glass sample vial: sweet, warm, thick, and golden. Imagine motor oil laced with honey, a pinch of clove, and a few drops of birch tar, and you've got Esprit de Cuir once the faint hint of citron dissolves. It is a comforting scent, sweet and balsamic, and would be wonderful to wear when it's snowing outside. But you know what? After half an hour it's a dead ringer for Dana Tabu. Tabu is a lot cheaper.

Finally we come to Esprit de Chypre, the scent that really made my heart beat faster when I knew a sample was on its way. Luckyscent lists its notes as bergamot, ylang ylang, citron, patchouli, nutmeg, vetiver, oak moss absolute, heliotrope, and cistaceae absolute. I smell the citron and maybe nutmeg right away, then the perfume settles into a stretch of rich ylang ylang, oak moss, and labdanum. (In fact, if you don't like ylang ylang, you should skip this one.) It's a nice scent, more spring-like than some heavy-hitting chypres, but it's not revelatory — at least, not to me. For an old-fashioned chypre also supposedly inspired by Grassois notebooks, I'd choose the brighter, more complex Aedes Histore de Chypre, but if a bottle of Esprit de Chypre came my way I'd wear it.

I love vintage perfume, but in the case of Auguste, "vintage" translates into "narrow" in some way, as if the perfumer only had ten notes and no volume control in her work. I'm tempted to chalk this up to the old methods and recipes that Auguste uses, but then I think of a dozen other perfumes originating between 1905 and 1920 — Guerlains, Chanels, and Carons — that feel expansive and surprising compared to these. For now, I'm safe from Auguste, and my credit card remains in its wallet. Of course, that pastis looked pretty good...