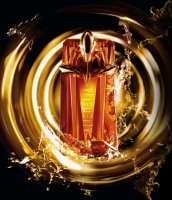 Alien Eau Luminescente is described as a "fresh, floral amber scent". It was developed by perfumer Dominique Ropion (who also worked on the original Alien perfume) and features notes of mandarin, tiaré flower (gardenia) and white amber.