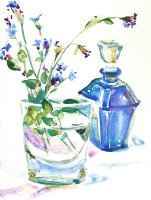 The world doesn't need several new perfumes to launch every day, that much is obvious. Multi-scent luxury collections aren't special when a new one appears every few months. New "niche" lines whose fragrances don't offer any meaningful alternative to what is already on the market are just plain annoying.

Of course, like any perfumista, I have my own wishlist of dream fragrances. I'd still like to see an incense fragrance from Ormonde Jayne, and the wait for something new from Parfums Delrae is getting agonizingly long. But my respect for the smaller brands that don't feel the need to flood the market with a handful of new scents every other month is increasing by the minute.

My biggest pipe dream: the return of the Gobin Daudé line. The niche house launched in 2002 with five truly gorgeous and unusual fragrances. When I reviewed Sous Le Buis and Sève Exquise back in 2005, the line was just starting to disappear from stores. I loved the scents but balked at the prices ($140 for 50 ml), and didn't succumb to a purchase until Takashimaya had placed the fragrances on clearance for around $20 each. Given what has happened in the world of niche fragrance since then, it is an understatement to say I've reconsidered. $140 no longer seems so outrageous now that we've seen a kajillion drop-dead-boring niche fragrances launch at much higher prices. At the time the line folded, it was rumored that two new fragrances were in the works. I can't think of a single niche line that launched in 2007 that I wouldn't trade away for for those two new Gobin Daudé scents without a moment's hesistation.

Note: the lovely drawing of flowers and a bottle of Guerlain's Guet-Apens is via Laurelines.