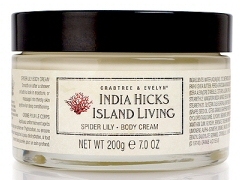 Before I could even try the Spider Lily Body Cream from Crabtree & Evelyn’s India Hicks Island Living collection, I had to figure out why the name “India Hicks” sounded so familiar to me. Ah, yes: if you’re old enough to recall the Royal Wedding of 1981, as I am, you may also remember her as one of Princess Diana’s bridesmaids at that “fairytale” event.

At the time, I was mesmerized by the entire spectacle of the Charles-and-Diana wedding, including the sight of a girl only a few years older than myself who held such a romantic and important duty. How had she been granted that honor? Apparently, it’s an advantage to be a goddaughter of Prince Charles and the granddaughter of Lord Mountbatten, the last Viceroy to India (hence her name), as well as a descendant of Queen Victoria. Now, thanks to some research, I also know that India Hicks has been busy with other stylish occupations over the past two decades: she has been a model (for Ralph Lauren and others), an interior designer (following in the celebrated footsteps of her father, David Hicks), a hotelier, and the author of two books that share her lifestyle in the Caribbean, Island Life and Island Beauty.

The twelve products in the Island Living line of toiletries and home fragrance, which Hicks developed in collaboration with Crabtree & Evelyn, draw upon her lifelong appreciation of the West Indies’ indigenous flora. Hicks describes the spider lily, her favorite island flower, as both fragile and tenacious, growing straight out of the sand near the shore. Its fragrance, as captured in the Spider Lily Body Cream, is delicate and crisp, complimented by notes of citrus (particularly lemon, to my nose) and a hint of salty sea air. I can’t normally wear white florals, so the breezy, light touch of this blend was a pleasant surprise for me. The spider lily is definitely not a waxy, heady, hothouse lily like those you may have recently encountered during the Easter season.

The formula of this Body Cream is so thick that other companies might have (less elegantly) called it body butter: it has a luxurious, spreadable texture. The scent clings well and recurs throughout the day. I wish that Hicks and Crabtree & Evelyn had also created a body lotion, since I can imagine this cream feeling slightly heavy in hot weather. However, it’s an excellent, highly concentrated moisturizer, so I shouldn’t complain. And, according to the label (which was inspired by antique botanical prints), it contains shea butter, avocado butter, mango seed oil, and other nourishing, nature-based ingredients reminiscent of the Bahamian landscape.

The island on which I spend most of my time is the Island of Manhattan, where I’m more likely to be found riding the subway than lounging on a shady veranda overlooking turquoise seas, but Spider Lily Body Cream will infuse my own days with a bit of beachy, aristocratic glamour nonetheless.